The ecological interest of La Pletera lies in the presence of brackish and hyperhaline coastal lagoons, with well-conserved halophilic and psammophilic plant communities growing in the area as well as established colonies of Iberian toothcarp (Aphanius iberus), an endemic fish to the Iberian Peninsula that is in danger of extinction.

In the late 1980s, La Pletera saltmarsh was affected by building works for a residential estate, discontinued in the early 1990s. However, the saltmarshes are still a space of great natural interest, despite being interrupted by physical barriers such as a promenade, levees, piles of rubble, and semi-built-up areas, all of which hinder the proper ecological functioning of the lagoon system.

Parallel to the marsh, there is a line of dunes that is currently very little consolidated. These conditions can cause the intrusion of beach sand into the marsh area. A dune quality system is not only important for the correction of possible geomorphological dynamics but also for the interest of the plant communities located there.

The Habitats Directive defines a natural habitat as those areas, terrestrial or aquatic, differentiated by geographic, abiotic, and biotic characteristics, whether they are totally natural or semi-natural. They are Habitats of Community Interest (HIC) those that:

Finally, the Directive defines the priority HICs, which are those that are threatened with disappearance in the EU territory. Conserving them is a special responsibility for the European Union, due to the importance they have on a global scale.

The following Priority Natural Habitats (HIC) are located in the area of La Pletera: 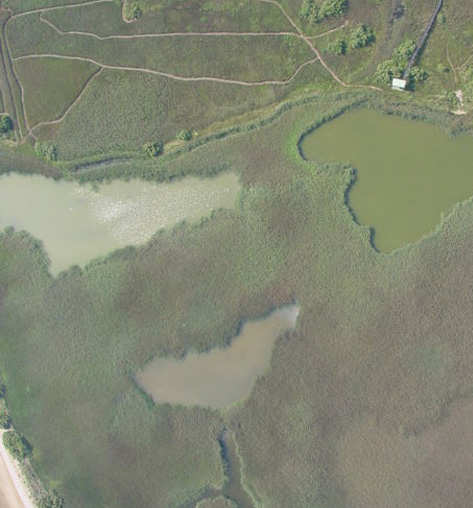 The Habitats Directive protects around 1200 European species other than birds which are considered to be endangered, vulnerable, rare, and/or endemic. Included in the Directive are mammals, reptiles, fish, crustaceans, insects, molluscs, bivalves, and plants. The protection provisions for these species are similar to those in the Birds Directive. These provisions are designed to ensure that the species listed in the Habitats Directive reach a favourable conservation status within the EU.

The Habitats Directive species and sub-species are protected in various ways:

The species in the area that is listed in Annex II is the toothcarp (Aphanius iberus), an endemic fish of the Iberian Peninsula that lives in marshland areas and high-salinity waters. The drying of these spaces throughout history and the most recent regression of wetlands for urban and tourist uses are the main reasons that have led to the regression of this species of fish. La Pletera had a core species population of toothcarp. The project LIFE 99/NAT/E/00638 increased the core species population thanks to the creation of new lagoons.